Cost to Build a House: Why builders over-charge for change orders

One simple reason home builders over-charge for change orders: poor planning. Here's why it happens and how to avoid it when building a custom home on your land or the builder's land.

Look closely at a set of house plans: there lines and text representing walls, doors, windows, cabinets, and many other elements that make up a finished house. There is a lot of information, including notes and dimensions, but there's more information that's missing than information that's included. That lack of information is the crack that allows change orders to trickle in and money (your money) to leak out. 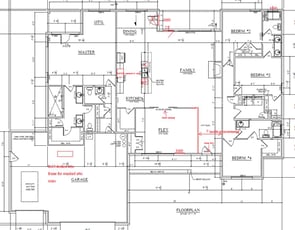 Think about what's typically not listed on the plans:

I could go on and on with this list (it takes about 17 letter-size pages to list out all the details in a house), but you get the idea.

The problem is, when you look at that set of house plans, you're making certain assumptions in your mind, unconsciously, and your builder is doing the same thing. If you don't bring up every one of those assumptions, aren't many of them bound to be different between you and your builder? Then, during the build, the builder is going to install something that matched his assumptions but didn't match yours, and you're going to want to change it... An honest assumption on both your parts, but now you're going to have to pay to remove whatever it is you don't like and replace it with something you do. Here are the costs involved:

(There's another type of change that exists, the kind where you simply changed your mind about something you had already chosen, but we're not going to cover that one here. The cost is the same, but in that case, you're making a conscious choice, which is within your control, and perfectly within your rights as a customer.)

How to avoid the high cost of change orders

In the scenario above, you asked for a change simply because you and the builder had honest, good-faith expectations that were different. Neither of you was being dishonest or trying to hide anything, but it still cost you money.

Above we talked about the house plan and all the missing details. There's another critical document that was missing from that discussion, but has a huge impact on the cost to build: the missing document is called Building Specifications. Many smaller volume (particularly custom) builders simply don't create a detailed list of specifications because it is a lot of work, and because they don't have a large staff and are probably on the job every day, those builders simply don't have time to create the documents and build the houses. Also, because every "custom" house they build is similar to the last one they built (and every one before that), they simply repeat the details again and don't feel the need to write them down.

When you're ready to build your custom home, you must insist on all the details being listed out. Probably 80% of it won't really make any difference to you - white toilets are probably just fine - but there's that 20% that you really care about, and some smaller part of that 20% will be different in your mind than in your builder's. You have to get that out on the table, but you won't know which items they are until you know what your builder is assuming.

You might have to force the issue, insisting on that list of details, and if you can't pry that list out of the builder, good guy that he is, it might be time to find a builder who isn't too busy building change orders to build your house on paper before it becomes a reality.

To find out more details on the entire building process, download our free guide, From Raw Land to Forever Home:

Tim Turner
A home builder for over 20 years, Tim is the "son" in Turner & Son Homes. He is the CEO of the company and partners with his dad, Ben, who has been building since 1964.
3 minute read