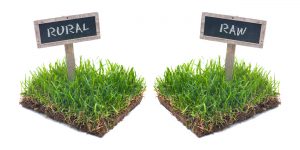 That's one of the first decisions that you'll face when you decide that you want to build in the country – subdivision or raw land. Neither one of these is better than the other, but one will suit you more depending on what you're looking for in a home and a neighborhood.

Let me tell you about a couple of the differences between these two situations so that you can make a good decision.

Building in a rural subdivision

The upside of an established subdivision is that you won't have to deal with some of the logistical problems that come with raw land. The developer has already extended utilities to the property and the address is established. Since a subdivision is typically on its own street, you also won't have to worry about fronting on a main road. The main advantage here is simply that a lot of the land prep work is done for you.

While you might be on the same amount of land as you would farther away from town, you're still going to be dealing with neighbors and a homeowners' association. Usually in the subdivision setting, there are going to be rules about what you can build on your property, what type of fence you can use, etc. And along with having a say in what you can do, the association will usually require you to pay dues to maintain the greenery and other common facilities.

To sum it up, in a subdivision you'll get the acreage and the privacy that you're looking for without having to do the heavy lifting of preparing land. But you will likely have to deal with a homeowner's association and they may have a say in what you build.

When you build on raw land, a developer is out of the picture. You can be as far from a neighbor as you'd like, and nobody is going to tell you what you have to build. So if you're looking for that highest level of privacy and control of your home and your life, raw land is a good choice.

The drawback with raw land is that there isn't a developer with utilities, surveys and logistical problems taken care of. You'll need to get a pin survey and make sure that there aren't right-of-way or egress problems. You'll need to make sure that you can get electrical service and sewage. There are usually some issues like these with raw land, and a good builder can help you sort them out.

With raw land, you get true freedom to build the home you want wherever you want, but you'll have to deal with all of the land-prep issues that you'd avoid in a subdivision.