Did you know we’ve been building homes for 50 years? 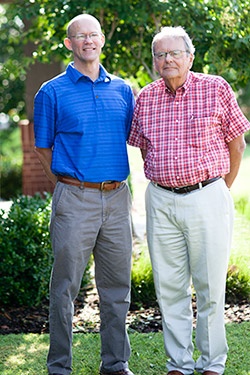 Experts say it takes 10,000 hours of practice to master a skill. And as often as people switch careers, it's becoming harder to find individuals who've had time to become experts at their craft.

Finding someone who's had far greater than 10,000 hours of practice and experience is even more uncommon, but we happen to know someone who fits the bill.

Ben began building homes in 1964. For over 20 years, he built his reputation as a reliable builder of high-quality, affordable homes, becoming a prominent figure in the central Oklahoma home building community.

After a brief period in the late 80s spent helping a local bank with several home building projects, Ben returned to his roots in 1990 when he launched First Star Homes, the company that would evolve into Turner & Son Homes.

Ben's first projects with First Star Homes started in Midwest City, then expanded over time to Edmond, and in recent years to communities throughout Central Oklahoma.

At a time when many builders were focused on cutting corners and compromising quality for speed, Ben bucked the trend and committed to efficiency instead of cheapness and building homes that can stand the test of time by taking a little extra time to build them the right way.

With Tim at the helm and Ben acting as Vice President, the company continues to grow and provide Central Oklahoma families with affordable, customized homes in both builder-owned communities and on customer-owned land – a rarity among Oklahoma home builders.

With a solid foundation underneath them, the Turner family is looking forward to the next 50 years of helping Oklahoma families build their dream homes.

Athena Captain
Athena Captain is Director of Sales and Marketing at Turner & Son Homes, where her passion is building a referral-based company in a niche market. She has helped create a business model that allows Turner & Son Homes to become the “concierge” of building on land in Oklahoma. Athena has successfully led sales teams within retail, banking, and finally bringing her talent to bear in the construction industry. Athena has developed a prospecting system while at Turner & Son Homes that allows any sales professional to become a referral magnet. She will share her system in her upcoming book The Making of a Rainmaker, soon to be released nationwide. With the launch of AthenaCaptain.com, she hopes to help other sales professionals, business owners, and companies apply her proven systems to increase revenue through referrals. She was honored to be a finalist for Edmond Woman of the Year in 2014. She is active within her community as a Board member for Oklahoma Family Network, and she is on the Leadership team of Savannah Station Equine Therapy Program.
1 minute read