The Beginning of Savannah’s House 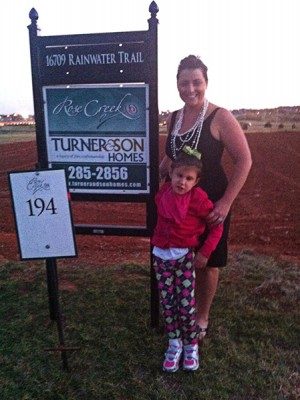 We sat down as a family with Tim on three different occasions to determine what we needed for Savannah’s ideal home. Tim was patient with us and asked many questions about things we hadn’t considered. It allowed us to walk through ideas we would not have thought about or know to ask.

We carried out research for ADA ideas with Tim. We spoke with other clients and people we knew had built an ADA home. Once we had gathered the details of the home requirments we met with Tim once again. As we explained more he was able to take a current floor plan, the Juniper and make the changes. At the end of the meeting we had a rough drawing of Savannah’s home. It was as if he understood how to pull it all together for us.

After the plans were drafted we met again to review everything. We made two more changes to the plan due to the complexities of Savannah's needs. Justin Howard, President of Turner & Son Homes and Red Door Homes explained every detail to make sure all the needs were meet prior to construction. We found there were some items needed in the home which would require us to raise additional funds to complete construction, so we started saving. We felt it was a great way to invest in Savannah’s future.

During this process we were also looking for a lot in a neighborhood which would welcome Savannah's home. We wanted a neighborhood which would give her a great living environment as well as stable market values to protect her investment. This process was long and difficult. There were several communities which would not allow us to purchase a lot from them regardless of the support we had from the building community. We felt hopeless and frustrated.

Ben Turner, CO Owner of Turner & Son Homes told us to look into Rose Creek. We had thought that this would be outside our budget and the area would not welcome our project. However we followed the wisdom of Ben. We set up a meeting with Tom Hopkins the manager at Rose Creek to discuss our ideas and budget. He showed us a lot that could work, which had just become available and had also been discounted to fit our budget. Tom shared how he would be happy to work again with Turner & Son Homes as they had already built two homes previously in the community. Tom, my father, Dan Mason and my husband Jerry Captain stood on the lot talking about their military experience, demonstrating the respect shared between combat veterans.

The great track record of Turner & Son homes combined with the grace of Tom Hopkins secured our land in the Rose Creek community.

We met a number of new neighbors throughout the summer months while using the Rose Creek pool. They have welcomed Savannah as their own with open arms. We couldn’t believe that everything could turn out so well.

Getting started on the home.
We had the money saved up to start the building process. With all the hard work done, the choices, the lot and making all the changes we were excited to get started.

The first step involved the land being leveled and dirt placed. The second step was the development of the frames for the foundation. It was so exciting as we could see the outline of the house for the first time. We asked ourselves could it be real? Then as we watched the plumbing develop we new Savannah’s house was starting to take shape.

Athena Captain
Athena Captain is Director of Sales and Marketing at Turner & Son Homes, where her passion is building a referral-based company in a niche market. She has helped create a business model that allows Turner & Son Homes to become the “concierge” of building on land in Oklahoma. Athena has successfully led sales teams within retail, banking, and finally bringing her talent to bear in the construction industry. Athena has developed a prospecting system while at Turner & Son Homes that allows any sales professional to become a referral magnet. She will share her system in her upcoming book The Making of a Rainmaker, soon to be released nationwide. With the launch of AthenaCaptain.com, she hopes to help other sales professionals, business owners, and companies apply her proven systems to increase revenue through referrals. She was honored to be a finalist for Edmond Woman of the Year in 2014. She is active within her community as a Board member for Oklahoma Family Network, and she is on the Leadership team of Savannah Station Equine Therapy Program.
2 minute read